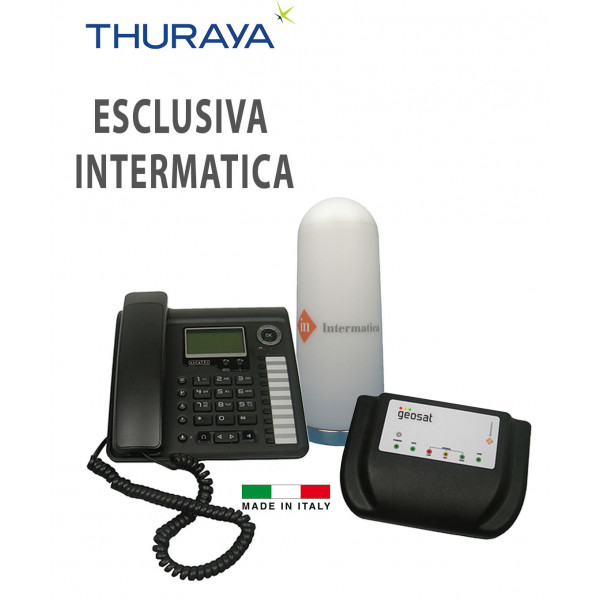 Thuraya Geosat is the satellite terminal, produced by Intermatica and certified by Thuraya, which supports voice services for fixed installations.

Geosat is the satellite terminal, produced by Intermatica and certified by Thuraya, which supports voice services for fixed installations.

The terminal, which operates on the Thuraya satellite network, is made up of three elements: the External Module - MoE, the Internal Module - the MoI and the analogue telephone.

Geosat has been designed to be easily installed: thanks to the omnidirectional antenna contained in the MoE, pointing is not necessary.

In fact, it is sufficient to install the MoE externally, in an elevated position, with 360 ° visibility of the sky.

Compared to other fixed terminals, the Geosat allows you to position the phone at a considerable distance from the antenna.

The MoI is connected to the MoE through the cable supplied. The MoI, in addition to powering the MoE, allows you to connect the supplied analogue phone (or a cordless phone).

The MoI also contains a back-up battery that allows operation in the event of a power failure.

The MoE contains: the omnidirectional antenna, the SAT and GPS module and the housing for the SIM card.

Are you sure that you want to report this comment?

Your report has been submitted and will be considered by a moderator.

error Your report cannot be sent

Your comment has been submitted and will be available once approved by a moderator.

error Your review cannot be sent